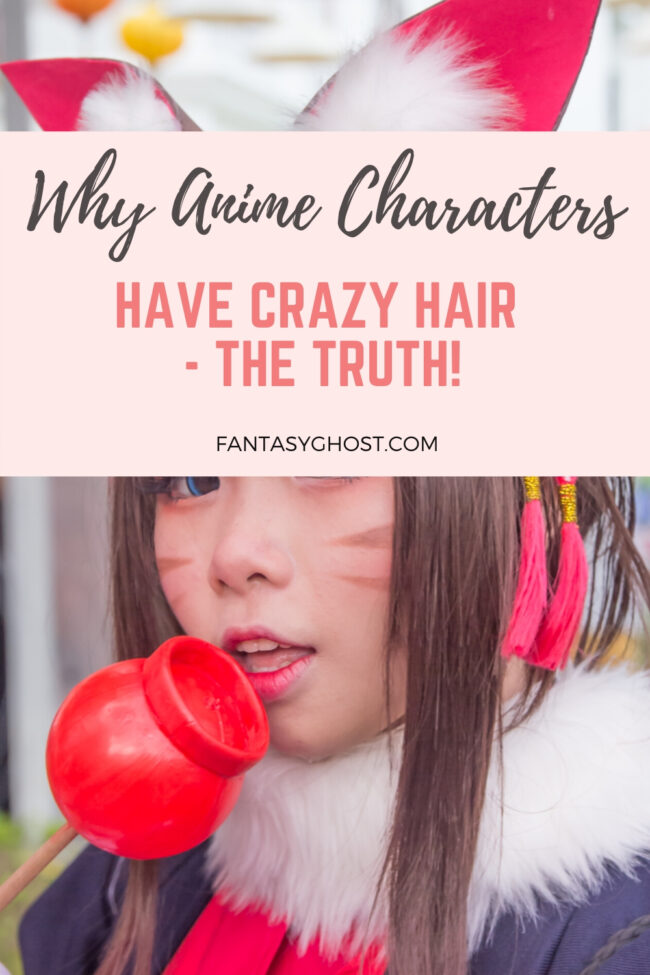 If you recently got into anime, you might be weirded out or even put off by the fact that most of the characters have such crazy hair. Is this intentional? Do anime artists do this to make the characters look more interesting?

Are there hidden meanings behind their hair color and hairstyles?

The crazy hair of anime characters is part of their character arc. The hair color and hairstyle have meanings. There are generalizations but, for most animes, they still stick with the general context. The hair color or style shows the personalities and motives of the characters.

So if you thought that those crazy hair are there just for the shock value, you are mistaken. If you want to know the meaning behind the hair colors and hairstyles of anime characters, then this is the read for you! Keep on reading for more hair surprises!

Anime And Symbolism (It Is Not Just Hair!)

However silly or serious the anime that you are currently watching, you should not simply take it as it is. Anime is expressed with such a strong visual language. Therefore, there are always two or more elements in a given scene that evokes deeper meaning.

An example can be a dark and heavy night, foreboding an upcoming fight. Another example is a cold drink where the ice is seen melting, which can signify a huge time skip.

The easiest way to establish a character, as well as his or her character arc in an anime, is to define their hair color and hairstyle. Therefore, the crazy hair that you see is not a depiction of how these characters will look in real life as well as their racial stereotypes.

In fact, these hairstyles and colors are hints on what the character will portray by the end of each episode.

Unlike other western cartoons where characters tend to stick with just one hairstyle and manipulate it based on their emotion, anime characters stick to their hair color, but their hairstyle will change once there is a huge shift in their arc.

A good example of this is Elsa, in the movie Frozen. At first, she is seen with a side braid, but when she becomes a Queen, her hairstyle is that of a neat bun. Even though there is a change in hairstyle, the way her hair frames her face is still the same.

On the other hand, for animes, they will stick to their hairstyles for a long time. It is only when there is such a great shift, that their hairstyle will change.

For example, Son Goku, from the Dragon Ball series, his hair will change color and will become fuller every time he unlocks his inner super Saiyan.

There are a lot of crazy anime hairstyles that surely, we cannot cover all of them as well as their meanings. Here are some of the commonly used hairstyles and their hidden meanings.

A single ponytail indicates normality in life. When used in a female character, she is usually strong-willed and efficient. As for males, a long and clean ponytail means that he is very powerful and decisive.

This can signify characters who are less mature, playful, and childish. When used on a mature character, this can also connote that once approached with a tough life decision, he or she does not know exactly what to do.

This is a very popular hairstyle used on a lot of male characters. This is where the hair is styled in such a crazy way where spikes and curls can be found on one head. This style was made to look fun, aggressive, and adventurous, which is perfect for animes that fall under the action genre.

This hairstyle is usually seen in characters that are of prominence in the anime. It was meant to look dignified, traditional, and mirrors the ideals of the Japanese. Characters with this hair are docile, demure, traditional, and wealthy.

Characters with these ringlets also signify royalty and a high social class. However, this hairstyle can also be used on characters that may not be of high social class, but think that they rightly belong there or they have a sense of false pride.

Plainly put, this means idiot’s hair. This hairstyle is used on characters that can be oddballs, naive, and even stupid. They can be very awkward in social situations. The video below shows a bunch of characters with ahoge hair.

This is one of the few hairstyles that depicts racial stereotypes, especially for Chinese characters. Characterized by buns which can be held clean or have long extensions. There is really no meaning behind this except for character identification.

These random hairs that stick out signify innocence and charm. Unlike the ahoge hair, characters with this hairstyle are more intelligible and enthusiastic.

For female characters who have short hair, they are usually tomboys. More than that, they are good at problem-solving that is based on action. They can be fighters, engineers, mechanics, etc. As for male characters, this only means that they are a normal character.

This is one of the hairstyles that are based on reality. Characters with this hairstyle are usually part of a mob or a gang. This is due to the fact that the Yakuza during the 1980s have this type of hairstyle.

Let us now move on to colors! Just like the hairstyles, there are also a lot of hair colors but the following are the ones that are commonly used. On the other hand, these colors still manage to stay true to their general meaning.

Unlike with the hairstyles, where it can be just due to the choice of the artist.

This is usually reserved for characters that are extremely special. If there is a special someone in the protagonist’s life, more often not that character will have this hair color. On the other hand, this color can be used on non-Japanese characters.

This color is for characters who are intellectuals. They can also be soft-spoken and introverted. However, they can possess such great power that they themselves are not aware of. For females, they can be a sign of being feminine, traditional, and refined.

With such a bright hue, it also follows that this color signifies a leader. This character is headstrong, and more often than not, very loud. They can also be inconsiderate due to their immense passion. They are known for acting rash, but they know that they are backed up by real power.

Having this color can be connected to a “genki girl” which is a type of character that delivers comedy. The character is active, upbeat, energetic, and can be sports-minded. Compared to a character with red hair, this character is more refined and intelligent.

This color is usually paired with the Hime cut hairstyle. The color signifies, being cultured, dainty, and mysterious. These characters can also seem detached.

Before, you will rarely see pink hair on mature characters as they signify fun, innocence, and being child-like. Nowadays, there are a lot of female characters with pink hair.

Usually, the female leads get this color and it means that they may not be so bright, they can also be naive, but they are idealistic, and will eventually become strong.

This hair color is perfect for the “day to day life character.” It signifies warmth and being friendly. You can almost always see this on characters that have longtime childhood friends or even a love interest.

Usually, characters with this hair color have a lot to do with the main plot of the anime.

This is the most common anime character color and it simply means “the everybody person.” This character can be extremely strong, weak, or plain. However, when paired with a strong hairstyle, like long and straight hair, it means that he or she is noble, mysterious, or even a villain.