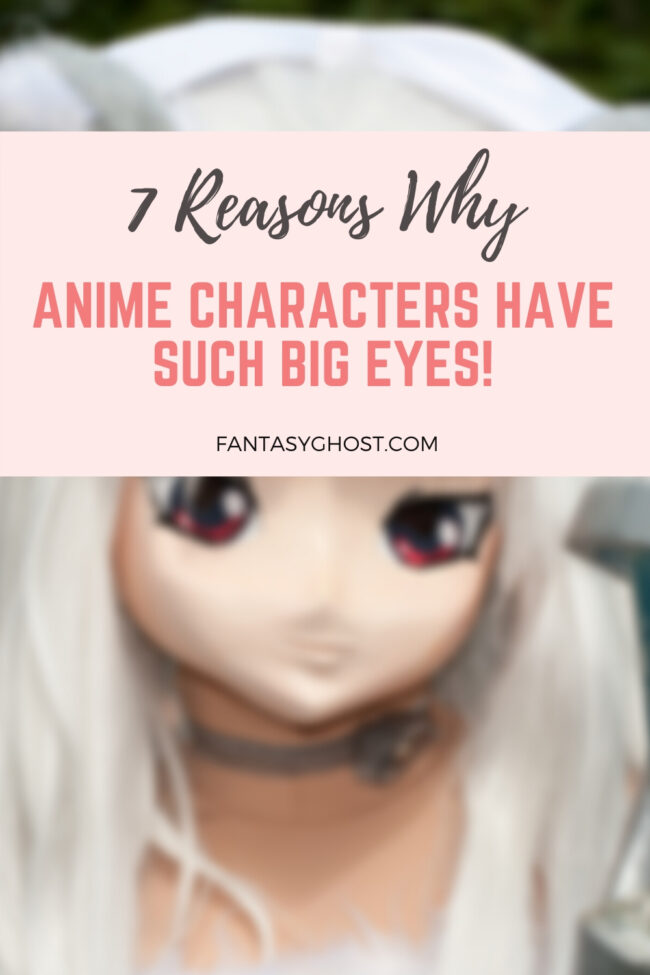 You might not have noticed that anime characters have big eyes when you always watch animes. But when you pause and look at the facial structure of each anime character, you will see that most of them have eyes that take up almost 60% of their faces.

What does this mean? Is it just an artistic choice? If that is the case, then why do a lot of anime characters have big eyes? Is it the norm?

Anime characters have big eyes because it makes it easier to convey their emotions. Their big eyes can also easily display what type of character they are. Unlike western cartoons, anime strive towards bringing emotion even if the characters do not look perfect, proportional, and realistic.

As you can see, the fact that anime characters have big eyes has a specific reason that ties in with the general theme of the anime. Does this also mean that the Japanese prefer to have bigger eyes? To know the answer to this question, keep on reading!

Why Do Anime Characters Have Big Eyes

The simplest answer to this question is that having big eyes can easily convey emotion. However, there are also different reasons as to why this is the case on most, if not all animes.

This style can also be a product of history as well as trade and business. You might also be surprised that this is done for efficiency. Take a look at the following reasons.

This is the reason that takes the primary position. The person who is considered as the “father of manga” is Osamu Tezuka and he is the creator of Astroboy. His style is to make characters have bigger eyes.

As his style is so influential, it was later taken on by manga and anime artists. According to him, this style was also influenced by western cartoon characters like Mickey Mouse, Betty Boop, and Donald Duck.

This makes a lot of sense because as the saying goes, “the eyes are the window to the soul.” If you emphasize the eyes, you can easily tell what is really happening with the character—even without the appropriate dialogue.

On the opposite side of the spectrum, it is believed by a cultural anthropologist that this style was done to appeal to a wider international audience. According to this anthropologist, artists chose to make their characters’ eyes bigger so that they will look less Asian.

Needless to say, there was a lot of backlash to this thought as first, this observation is definitely racist. Second, the Japanese are not even concerned about spreading anime to an international audience.

In fact, even the earliest days of anime have a lot of characters that have such big eyes. This is the time when Western fans did not even know a thing about anime. If this is truly the case, then probably, it was just an afterthought on the part of the artist.

Further, Japanese anime and manga artists are not known to cater to other audiences more than their own Japanese audience. It may sound harsh, but they will surely not change their style just to tap into a wider audience.

This anime character style may also be attributed to the fact that it was influenced by business and trade. During the Meiji era or the Victorian era, there was an open trade between Western countries and Asian countries.

These dolls that have a western-style was so popular to a lot of Japanese women and girls and may have influenced shojo mangas and girl mangas.

The influence in anime, on the other hand, was a bit tame, wherein they still have the big eyes but the overall design of the character is purely Japanese.

This may sound superficial but bear with us for a bit. We promise you, the reason is not that shallow.

It is a given that artists tend to lay on the cutesy side of things when creating their anime characters. However, this is not only because of their perceived appearance, but it is also done to serve as a “mediation form” when it comes to dark and heavier anime sequences.

Anime has a lot of types, but in general, it was made to entertain and at times move the audience. Therefore, there may be times when there are dark scenes that can be too much, and this is tamed by having a cute-looking character with such gorgeous and big eyes.

The tone of the scene can also be controlled using this style. For younger characters, they have bigger eyes than adults.

Further, if there are intense scenes, you will notice that their eyes become smaller, only to be uplifted by another lighter scene that features an anime character with big eyes.

This is the part where efficiency takes the center stage. A lot of animes nowadays transition a scene into characters that are chibis.

When you already have a character that has huge eyes, these eyes can easily be translated into their chibi counterparts which will be easier for the audience to comprehend.

You will notice that while watching an anime with a cut scene with chibis, you really do not look at the small body of the chibis. Instead, you focus on their eyes and their eyes serve as their distinction over other characters in chibi form.

In a way, having big eyes distinguishes them from another character. In this case, it is not a form of style, but a form of identification.

6. Do The Japanese Prefer Bigger Eyes?

We mentioned previously that there was a time when the Japanese adored dolls that have big eyes. This influence was later on exhibited in anime and manga. Does this mean that the Japanese prefer bigger eyes?

That is definitely not the case. Yes, you might ask a Japanese girl this question and she might answer how she wishes that she had bigger eyes. However, the reason is not about aesthetics. It is actually about adding character and emotion to one’s face.

As the Japanese consistently consume manga and anime, they are used to seeing emotions displayed simply through the eyes. This explanation is backed up by some artists like Hayao Miyazaki, the creator of My Neighbor Totoro, Princess Mononoke, Spirited Away, among others.

His characters have a more realistic face. Their emotions are conveyed with other actions, cinematography, and the sudden burst of music.

But then again. when the need arises, he cuts into a close up of a character’s normal-looking eyes and zooming in on them to make them look bigger than they actually are.

7. What Do Big Eyes Entail In Anime?

You now know that an anime character’s big eyes are not just there for show. So what are the instances when these eyes are put into work? Take a look at the following.

Younger anime characters have such huge eyes that there may not even be a space for their noses. Their eyes are also so detailed to make them look soft and loving. By just looking at their eyes, one can immediately say, “Awwww.”

On the other hand, adult anime characters still have big eyes, but their shading is a bit darker. Also, unlike younger characters, when they change emotion, there will be times when their eyes will become small.

For the younger ones, even though they laugh, cry, get mad, more often than not, their eyes remain huge.

You will notice that the eyes of the main characters are usually in a color that is easy to the eye. They can be black, brown, blue, and even pink. On the other hand, villains have peculiar eye colors. Some use green to convey seriousness and black for an evil character.

Characters that have a light personality have such huge eyes paired with sparkles. For characters who have low self-esteem, they still have big eyes but they do not have much detail to them.

This is the best way to convey emotion with the use of big eyes. You will notice that when the scene is happy, their eyes are bright, sparkling, and has a lot of detail.

When the scene switches to one with a darker theme, you can easily see how the character and the scene changes as their eyes are now a darker shade of their original color. Usually, the artist makes the big eyes look empty when there is death in a certain scene.

When you have been watching an anime with over 100 episodes, you might not notice it at first, but the characters change eyes as they go through their adventures. You can see this in animes like One Piece, Hunter x Hunter, Bleach, etc.

When a character goes through such an emotional stage where they lost someone or gained strength, they have a certain glint to their eyes that shows that they are burning through their character arc.

The artist will then stick with this eye style, up until the next arc in the story. Sometimes, the artist will defer to the old eye when there is a situation in the story that shows the character’s weakness. This is done to remind the viewer how far the anime character has changed.