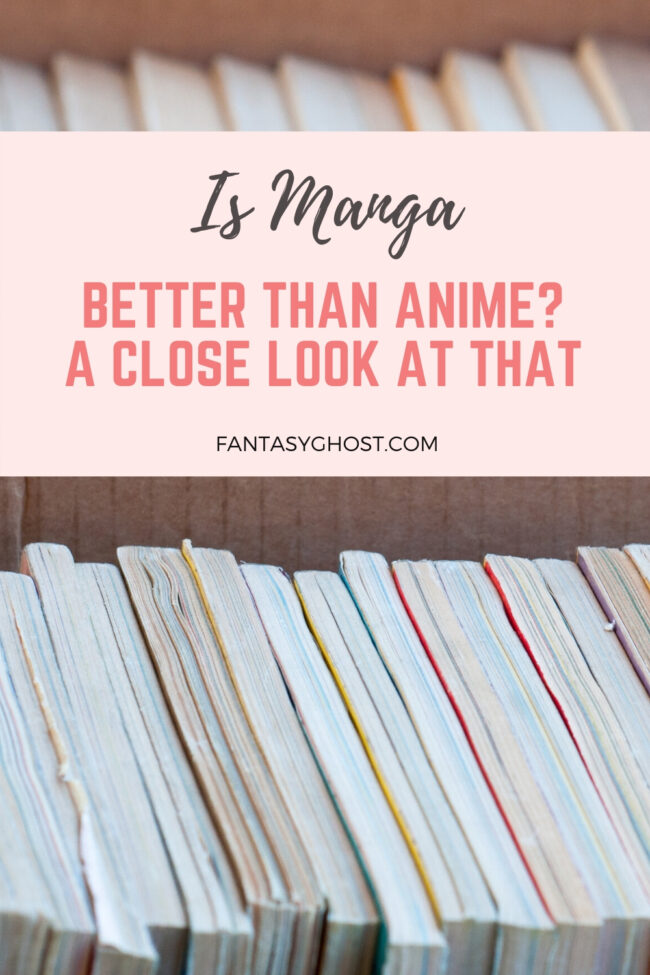 Is manga better than anime? Now, before you roll your sleeves up and get ready for a debate, calm down and let this article sift through your emotions.

We know that this topic can be so controversial especially for avid manga and anime fans. But what is really the deal between one being better than the other? Do they matter?

Manga is not better than anime, in the same way, that anime is not better than the manga. It really depends on what you want to get out of the experience. If you are after depth and fruition of characters, the manga is the way to go. If you want excitement and emotions, anime is your best bet.

You might be disappointed that we did not take any side in this age-long debate. However, in this article, we are going to show you why both media are great to enjoy the many interesting stories of the unique characters.

More than that, you can also figure out if reading manga or watching anime will be better for you!

Are you ready to stick with a certain side of the debate? If yes, then keep on reading!

Is Manga Better Than Anime?

A lot of people think that manga is better than anime. They think this way as the saying goes, “Nothing beats the original.” As all of you know, most animes, if not all, are adaptations from the manga.

One can think of it as a movie that was inspired by a book. A good example of this is Harry Potter. The franchise already had a lot of fans even before the movies were created, which was brought up by the fact that a lot of fans fell in love with the books.

Therefore, those who were able to read the books were disappointed in the movie franchise as they know that a lot of key elements were missing from the movie in order to appreciate the story. The same goes for manga and anime.

Due to the little time allotted for a time slot for the anime, it is impossible to cramp an entire manga volume in one episode. Cuts should be made which can change the story and even the character arcs.

In this regard, one can definitely see why manga can be better over anime. But is it really? Keep on reading to see the advantages and disadvantages of reading manga and watching anime.

Aspects Where Manga Is Better Than Anime

Are you team manga? Then, this is your time to shine! Take a look at the different reasons why manga can be better than anime.

Mangas came into fruition in the 1940s, after World War II. One might think that owning and reading one can be an act of participating in a piece of history.

For hardcore manga fans, there is no better feeling than having a complete collection of a manga series. You can always revisit them and at the same time, keep them in mint condition.

More than that, certain mangas have become a popular collector’s item. Compared to anime, in which anyone who has subscriptions or online access can consume content, the manga is limited. Therefore, owning manga is more valuable.

In mangas, you can completely see the motive of the mangaka. Everything that was put there was from the original mind of the creator. Unlike animes, the mangaka should yield to the director, animators, editors, audience, etc.

In the manga, the story is what it should be. No matter how long or short the manga is, everything is there for a purpose.

In terms of illustration, it is in the manga where you can see what the characters should really look like. When compared to animes, these characters sometimes change in appearance to have a more emotional appeal.

Nothing can make you understand a story arc and a character arc than a manga does. Each storyline and character development is detailed in the manga.

There are times when you watch anime and you will notice that there are questions that are unanswered or actions by the characters that are not within their arc. All of those plot and character holes can be answered in the manga.

In fact, there are volumes in a certain manga that is devoted solely to a certain character arc. In this way, the reader can understand the character more. Therefore, there is a solid base as to how he or she affects the entire story.

However, for mangas, you will most certainly be immersed with each character arc.

Use Your Own Pace

When you have a manga, you have it forever (unless you lose it or give it away) You always have it ready for your consumption. You decide when to start and when to stop.

You can also go back to past volumes in order to verify the future happenings in the current volume that you are reading. As for anime, you are forced to digest everything in one go.

The answers from the previous episode may not be answered in the second one, therefore, you have to keep on watching.

A good example of this is the manga Hunter x Hunter. As of the moment, the anime has incomplete seasons and it is still unsure when the new seasons will be produced.

But for those who read the manga, they now know the developments in the story as the production of the manga is continuous.

Most importantly, in mangas, there are no fillers. The story just goes on and on. In animes, it is fairly common to have filler episodes, especially if the new episodes are not yet ready. Filler episodes are still great, but for a lot of people, they are just a waste of time.

Aspects Where Anime Is Better Than Manga

Now is the time for anime fans to make some noise! Wahoo! If you guys have been feeling left out due to the “originality offense” of manga fans, then here are some reasons as to why anime can be better than mangas.

There is nothing more satisfying than seeing the characters brought to life. You know how they look, how they sound, what their mannerisms are, etc. In anime, you get to see them live their life.

Therefore, it is more engaging to watch as you are not leaving any of the stories and characters to your imagination. You can simply just sit back and relax and let the story unfold, literally, in front of your eyes.

Each character looks so unique, and you can see their personalities shine through with how they were designed and how they interact with other unique characters. In fact, even without the story, you can still remain engaged by how amazing everything looks.

Even though most of them are not realistic, you can completely immerse and fall in love with fantasy worlds. This is only possible due to great aesthetics.

When compared to the manga, even though everything is beautifully drawn, you still have to picture everything in your mind in order to appreciate the content.

For a lot of mangas and animes, there are always action scenes. When you just consume manga, it can be a bit difficult to appreciate these scenes. All that you get are various, “Aaaaaahs,” “Ughhhs,” “Booooom!.”

But for the anime, you can see how the action scenes unfold. You are part of the struggle when a certain character is losing the fight. You can feel the strength of the villain when he thinks that he will actually win.

In short, you become one with the character, especially in action scenes. This is the greatest strength of animes as action scenes were meant to be watched and not read.

Coming from the keyword “action” it is hard to understand the meaning behind these scenes, especially if you are just reading them.

Some may disagree especially when animes tend to over exaggerate action scenes to the point where they already deviate from the original manga content. However, just as long as these artistic choices do not meddle with the story, it actually adds more character to the scenes.

With anime, you can see the wounds, bruises, sweat, tears, blood, etc. that everything is more realistic and the action scenes are no longer there just for entertainment.

The same goes for comedic scenes. Simply reading funny lines may not be enough, but when you watch animes, the punch lines always land because they are perfectly timed.

Matched with funny movements and other comedic responses, you might just be surprised that you are laughing loudly as the story unfolds.

When it comes to watching animes, you always get the full experience. You see the characters, you understand the story, you hear them, you know what their environment looks like, and most especially, you get moved by the musical score. Definitely, it is the complete package.

Almost all of your five basic senses are triggered which is why it is easier for you to fall in love with the story and characters.

Yes, reading manga can also have this effect in you, but this effect is gradual only after you burned through a number of volumes and your imagination is already active.

An example of this is the anime, Violet Evergarden. Okay, it did not necessarily come from a manga as it was adapted from a light novel, but the logic is still the same.

The novel was great in itself, but the story was beautifully told with anime. The characters came to life, the music was excellent, and of course, it has an exceptional story.

In return, everyone was moved by the anime. Compared to simply reading the light novel, people may get other interpretations, but with the anime, the messages are synonymous.