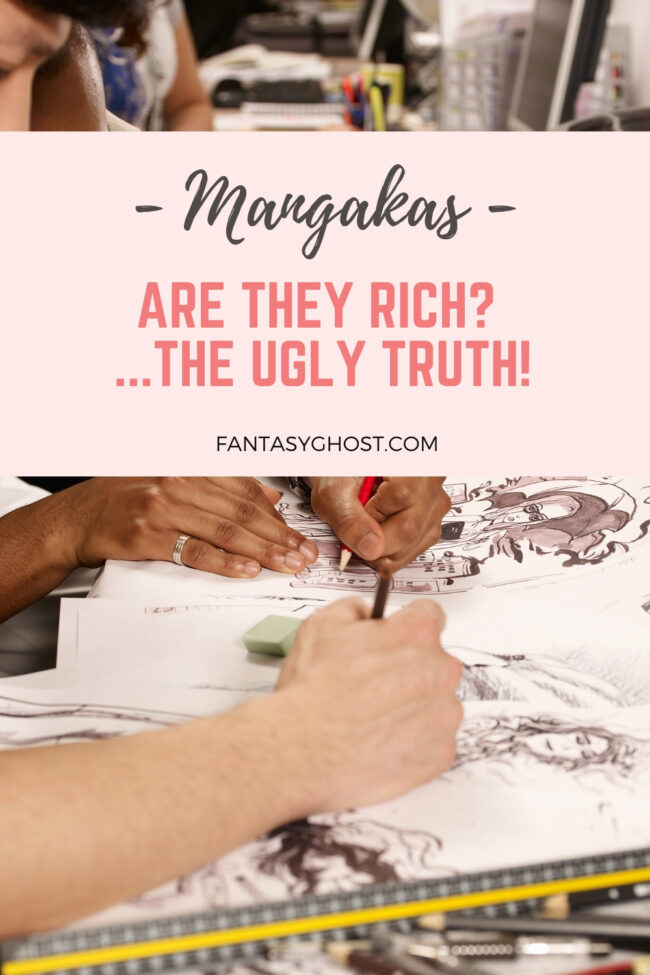 Do you dream of being a mangaka? Were you inspired to be one especially when you saw the income of the most famous mangakas? Surely, being a mangaka can be a dream for anyone who loves drawing and has a passion for telling stories. If you make it, you are set for life, right?

Most mangakas are not rich. In fact, when it comes to the income of mangakas, they fall under extremes. It is either they earn too low or they earn so much that they can belong in a “richest mangaka list.” The reality is it is hard to reach a point where a mangaka can actually make a decent living.

On the other hand, it is not all that bad. The struggle to become a successful mangaka is definitely worth it. But at the same time, a mangaka should also face realities such as cost of living, salaries of assistants, time, effort, and the like.

So if you are curious about how much mangakas make, then keep on reading!

Mangakas Can Be Rich!

A quick online search will show you various lists about the richest mangakas. Therefore, it is a given that yes, it is possible to be super-rich if they have already made it in the manga world. So, how do mangakas become successful?

It is not enough for a mangaka to get published in different media. One should get published weekly and get a retainer contract. More than that, once his or her work is so popular, they should now move on to merchandise.

For a lot of people, they think that a mangaka is successful when his or her work is adapted into anime. But that is not really the case. In the event that their works get adapted into anime, the pay is still relatively lower than getting their mangas published.

Therefore, one can say that a mangaka can only be considered rich after successfully publishing and selling 500,000 copies of their work.

A very successful mangaka is Eiichiro Oda, the creator of One Piece. By now, it is estimated that he has already made over $100 million and of course, this number will still grow as the story is not yet done.

With that said, will a mangaka become rich if he or she just keeps on making mangas? Surely, their work will get picked up as they go along, right? That is what we are going to talk about in the next part.

Will a newbie mangaka get rich after publishing many works? Unfortunately, the answer is no. Even if a certain mangaka has a popular work, it is not assured that he or she will become rich.

In fact, it is also extremely hard for a mangaka to get a proper debut. It not as simple as drawing something and submitting it to a publisher. Even new mangakas need assistants. In turn, the pay of the assistants come from the pocket of the mangaka.

It is extremely rare to have a publisher which can shoulder the pay of the mangaka’s assistants. This also applies to popular mangakas. So, their work got published, what then? Will the money keep on coming?

The answer is another no. It will depend on the sales of the manga. Even then, money from the mangaka is also spent on marketing and advertising. Therefore, if a lot of copies are sold, the money that comes in only breaks even the expenses of creating the manga.

As you can see, it is not that simple to earn money when you are a mangaka. They exert a lot of time and effort and the gains are not really assured.

Definitely, once you go through the problems, you will have more respect for mangakas. Further, you may even be amazed by the popular mangakas who were able to overcome these problems.

The Work Takes Too Much Time

Drawing and creating stories pretty much take over the life of a mangaka. Going out with friends? Spending time with the family? Well, forget all of those things as they do not have enough time to do those anymore.

If a mangaka is lucky to score a deal with a publisher, he or she is required to submit work almost every other day for the manga to be published every week. Not only that but these works also, may or may not be sent back for continuous revisions by their assigned editor.

You can think of it as one step forward, and two steps back. It is not assured that once mangakas finish their work that all of those will be published right away. A lot of the, are usually sent back with comments from the editor.

The worst possible revision is one that affects a storyline, which means that the mangaka should not only revise the current work but also change his or her other works that were already submitted.

The number of revisions is also unlimited. Add to that the fact that mangakas usually fight with their editors due to mismatch of ideas.

After all of this is done, and a mangaka chooses to take a vacation, this also spells more work. As the mangas will not draw themselves, the mangaka should work twice as hard to have the pending publications ready before he or she takes their leave.

Mangakas die from exhaustion. This is definitely not an exaggeration. As their lives are all about stories and drawing now, they only have a few hours left to eat and rest.

Even then, they do not have quality resting time as their minds are always within the bounds of the manga that they are creating. Even popular mangakas get a lack of sleep. The more people are demanding content, the less time they have to take a break.

For popular mangakas, they say that they are very lucky to have three hours of sleep. More so for beginner mangakas who are working extra hard to get their debut. They may not even be sleeping at all!

More than that, they can also develop eye problems and injuries with their hands. The truth is, some mangakas quit even before they make their debut because of suck harsh working conditions.

You might think that the pay is fairly reasonable when mangakas are pretty much drawing for 20 hours a day, but no, the pay is still low for the amount of time and effort that they exert. Even professional mangakas have low pay, especially if their works rely solely on getting published.

It is estimated that mangakas can earn 10,000 yen or roughly $100 per page. Therefore, for you to get $3,200 per month, you need to at least draw 32 pages. Those numbers do not even account for the fact that some of those pages need to be re-drawn due to revisions.

As you can see, the amount that they get is not directly proportional to the stress that their work gives them.

This is in relation to the previous problem with pay. As we have mentioned earlier, drawing takes a lot of time, therefore, mangakas need to hire assistants to help with drawing the background, coloring, and the like.

Connecting those aspects with their $100 per page rate, 40% to 50% of that will go to the assistant. Therefore, the mangaka is only left with less money. Also, assistants tend to just stay in the home of the mangaka for efficiency.

With that said, expenses for groceries and other needs are, of course, shouldered by the mangaka. Fortunately, some assistants share the burden of these expenses as they are also passionate about the manga that they are currently working on.

On the other hand, having an assistant does not necessarily mean that the work will be easier. The mangaka should always guide and teach their assistants.

There will also be times when assistants mess up and the mangaka should correct their mistakes, and much worse, just start from scratch.

“Once a mangaka, always a mangaka”

In theory, this is applicable. But reality breaks this thought. It is not assured that a mangaka will get another contract once his or her work gets published and sold.

There will certainly be times when the publishing company does not feel the need for the new manga that the mangaka is working on.

Does this mean that mangakas stop working? Definitely not. They just keep on drawing in the hopes that their works will get picked up by other publishers. Therefore, they are working without pay.

This is also the reason why not a lot of mangakas do the work full-time. They are all aware that there will be periods of unemployment, therefore, it is good to have a backup job in order to provide for their basic needs.

However great mangas are, there are times when the sales decline. This is due to the fact that most mangas, even immediately after debut, get adapted into anime. Therefore, more people will just watch anime rather than going out to buy manga.

This is definitely bad news for mangakas who are still trying to build their audience as not a lot of people are visiting the stores. But just like any business, there will still be times when there is an influx in sales.

With this influx, other mangakas have the opportunity to continue adding volumes to their mangas.

The problem is that even most people who work on creating anime make very little money and are always under high pressure. Just have a look at the video below where people share their experiences on working as animators.